I was just listening to a Jimmy Moore podcast with former 20-year vegan Lierre Keith. 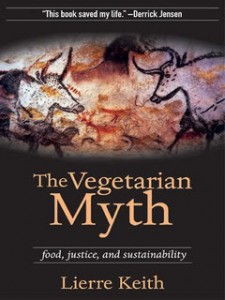 She makes some very good points about vegan diets being too overloaded with soy protein, and often too low on fat and high on grains. I definitely would agree that a high grain, low fat diet would eventually cause health issues. And she also speaks to the myths that veganism would save the planet, or that you can be a vegan and not kill living things. It’s very interesting and I think she’s got a message worth reading about and listening to.

However, I have a bone to pick with some of her claims.

First of all, I think she engages in some of the same type of broad generalizing that many vegans do. For example, she assumes that a vegan diet MUST be low fat, and MUST include lots of grains. True, many vegans do eat this way, but it’s definitely not the only way they eat. This is very similar to what I often hear from vegetarians and vegans about eating meat- that ALL meat is bad for you. They often don’t consider the vast differences in quality of meats, and how they affect one’s health. For example, grass fed beef is far more healthy for you than grain fed beef.

Secondly, she makes some claims that have not been scientifically proven. She says that all of her health problems were caused by her diet, but then uses confirmation bias as her evidence. She says that her vegan diet gave her low energy, but I have read vegans who claim that they gained energy by cutting out meat. So it’s just one opinion vs. another.

Granted, I have not read Lierre’s book yet, so I may be missing some studies or evidence that she is basing her claims on. And, from what I have read, a lot of the vegan craze was started by the thoroughly debunked China Study, which she also dismisses because of its use of a highly processed form of whey protein (which she says would give anyone cancer!).

There’s more to be said on this topic, as I think Lierre Keith is bringing up some important truths, but of course everyone needs to be highly scientific about any claims, as we always are at Healthy Mind Fit Body!

(BTW, here is Lierre Keith getting a cayenne pepper-laced pie thrown in her face by some vegan activists! That’ll show her I’m sure!)