I attended a meeting about the state of the U.S. economy last night, and what we can do about it. 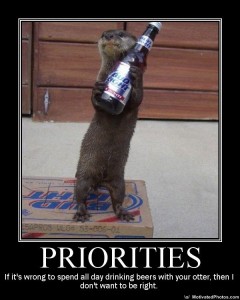 One of the ideas discussed was that our culture has adopted the idea that doing things for other people is the ultimate virtue, but doing things to help yourself (such as making lots of money) is frowned upon- and this is causing a lot of our problems. Bill Gates wasn’t considered a virtuous person on his way to becoming the richest man in the world, but now that he is donating lots of his money, he is viewed as a good person. This doesn’t make much sense, how would he be able to donate this money if he never became rich to this extent?

So this can be trouble when it comes to nutrition and fitness. I know of parents who do everything they can to give their kids healthy food, but their own diets consist of lots of junk food. They ignore their own needs and put their own health aside, making their kids the priority. This doesn’t make any sense at all either. One, the kids are going to see their role model making bad choices, and wonder why they don’t practice what they preach. And two, what would be the point of not taking care of yourself if you love your kids? Surely, you want to live as long as you can- and be able to spend time with your children and maybe grandchildren into old age!

The other-driven mentality leads to a dead end. Be grateful, give back, and help others- but for great health, to achieve your peak potential in all areas, and to maximize your contribution to the people around you (and to the world), the best thing you can do is to be your own priority- and yes, put your own needs above everyone else.

After all, if you don’t think highly of yourself, how can you have great influence on anyone else?